Having been unable to arrange a Christmas Lunch last year because of the Covid-19 pandemic restrictions, we took the opportunity offered by their relaxation this year to resume our practice of holding a pre-Christmas luncheon in December 2021. On this occasion we opted for a new venue for us – the Maynard Hotel at Grindleford.

In the company of our wives or partners, forty of us assembled for pre-lunch drinks before taking our places at table for a three-course meal. For many of those present, this was the first time that they had met colleagues and friends at such an event for several months, a factor contributing to the overall enjoyment of the day.

The 2021 Summer Lunch at East Lodge

At last! After a frustrating eighteen months of lockdowns and social distancing imposed as a consequence of the Covid-19 pandemic, this was an opportunity for us to meet face-to-face again as a Club.

Including wives and partners, 29 of us assembled for our Summer Lunch at the East Lodge Country House Hotel at Rowsley on 21st September 2021 (somewhat later in the year than previously). On this warm and sunny day, we were served glasses of Prosecco and canapés in the hotel’s garden before making our way indoors for our meal.

In view of the length of time that had elapsed since most of us had been together ‘in the flesh’ as compared with ‘on screen’ by video conferencing, this was an especially convivial and enjoyable event, admirably organised by our current Vice Chairman, Peter Stubbs.

Unsurprisingly, in view of the Covid-19 pandemic this year, our social activities have been severely curtailed. With the overwhelming majority of our members being of an age that places them in the ‘at risk’ category, combined with government rulings on the maximum size of social gatherings, we were forced to cancel the arrangements for our customary Summer and Christmas Lunches, and the more recently introduced Afternoon Tea at Hassop Station Café. Plans for a three-day trip to Shropshire in June were also shelved but, hopefully, only temporarily until conditions permit them to be resurrected for a future occasion.

Determined not to be beaten by Covid-19, in May we started to hold our Club meetings by means of video conferencing, and these continued at our usual twice-monthly intervals until December when, for our final get-together of 2020, we held an informal ‘Variety Acts’ video conference on 15th December. For this light-hearted event, the participants were asked to wear seasonal headgear and to prepare some jokes, limericks, poems and anecdotes to share with us. A total of 24 members took part and several of them offered contributions to the proceedings. These included short quizzes and, from one member, video clips of his grandchildren singing carols. All in all, this was an enjoyable way to end this difficult year.

On 10th December, we met for our annual Christmas Lunch at what has become its regular venue in recent years, the clubhouse of Bakewell Golf Club. With our wives or partners, fifty of us sat down to enjoy yet another excellent meal at this venue.

Fifty five people, comprising club members with their wives and partners met on 9th July 2019 for our annual Summer Lunch. As in previous years, this was held in the Hassop Hall Hotel near Bakewell but it was an occasion tinged with a little sadness because the hotel is to close in the autumn and this would therefore be our last opportunity to hold this event here. In spite of this, there was no diminution in the traditional quality of the food and service and we enjoyed an excellent, convivial meal together.

Two events were held in May 2019 for members of the club, their wives and partners. The first, on 7th May 2019, was at the Hassop Station Café for a traditional Afternoon Tea of sandwiches, cakes, scones and, of course, tea. This was the third successive year of holding this event and it still proved as popular as on the previous occasions.

A week later, on a gloriously sunny Spring morning, a group of us set out for a day trip by coach to North Staffordshire. Our first destination was the Wedgwood factory at Barlaston where, after morning coffee, we were given a guided tour of both the factory itself and the adjacent museum. This has extensive displays explaining the history and showing examples of the fine porcelain produced by this world-famous firm, which was founded by Josiah Wedgwood in the mid-18th century. 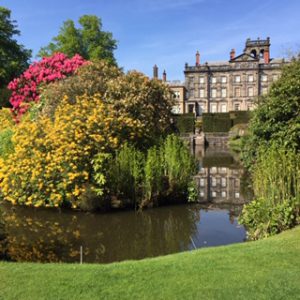 After lunch in the on-site restaurant, we rejoined our coach for the half-hour drive across the city of Stoke-on-Trent to the National Trust garden at Biddulph Grange. Here we were able to spend a couple of hours exploring this remarkable arrangement of landscaped garden with its various sections based on different ‘themes’, such as Italianate, Chinese, or Egyptian.

Thanks to the careful planning of the trip by Chairman, Ian Johnston and, as a bonus, the perfect weather conditions, the outing was judged to be a huge success by all those participating.

On 11th December, for the fifth consecutive year we met at the clubhouse of Bakewell Golf Club for our annual Christmas Lunch. With our wives or partners we enjoyed yet another excellent meal at this venue. By coincidence, this was also the birthday of one of our members. To mark this event, the proceedings were opened in fine style with an enthusiastic rendition of ‘Happy Birthday to You’; the singing being led by our newest member whose former occupation was as a professional singer. Thus, the scene was set for an extremely jovial and friendly meal.

For our 2018 outing, 34 club members, wives and partners stayed local to Derbyshire by visiting Buxton. We started with a guided tour around the magnificently ornate Edwardian Opera House which is one of many designed by the theatre architect, Frank Matcham. Included in our tour were many parts of the building not normally open to the public, such as the stage and dressing rooms. 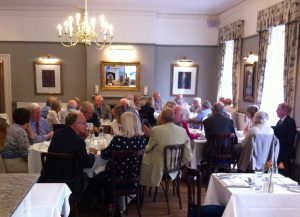 From the Opera House we walked the short distance to the Pump Room where we heard a short illustrated talk outlining the history of the adjacent Buxton Crescent. This building, dating from the late-eighteenth century, was intended to rival that of Bath and, for many years, served as a fashionable venue for clients drawn to Buxton by the medicinal attractions of the spa’s thermal mineral springs. Later, with changing times the Crescent saw different uses until, with increasing costs of maintenance, its structure and appearance slowly deteriorated and it became something of a local eyesore and embarrassment. However, in recent years a major refurbishment has been under way and it is planned to reopen the building as a top-class hotel in 2019.

We concluded our outing with a two-course lunch at the nearby Old Hall Hotel.

Held during the Autumn in previous years, this annual event was moved to the Summer this year. On 17th July 2018, some fifty people comprising club members and their wives/partners met in the prestigious surroundings of the Hassop Hall Hotel near Bakewell. Having enjoyed pre-luncheon drinks in the bar, they moved into the dining room for a three-course meal.

An innovation this year was that, after the main course had been cleared away, half of the guests changed their seats such that everyone was seated between different neighbours for the dessert course; thus providing the opportunity for people to converse with a greater number of their fellow guests than would otherwise have been the case. This proved to be a success which will most probably be repeated in future.

Following the success of last year’s inaugural event, members of the club, their wives and partners met on the 1st May 2018 at the Hassop Station Café for a traditional Afternoon Tea of sandwiches, cakes, scones and, of course, tea. The event proved as popular as in 2017 and will probably now become a regular annual gathering. 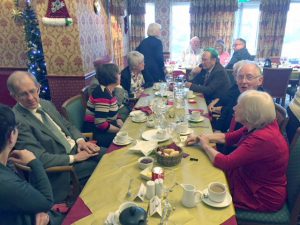 Once again, the clubhouse of Bakewell Golf Club provided the venue for our annual Christmas Lunch at which our members and their wives or partners were treated to another excellent meal in relaxed and convivial company, as illustrated by the accompanying photo of one of the five tables.

The 2017 Ladies Lunch at Hassop Hall

A total of more than sixty people assembled on 19th September 2017 at the Hassop Hall Hotel near Bakewell for this annual lunch which provides the opportunity for club members, their wives/partners and guests to meet each another in an informal and relaxed atmosphere. Pre-luncheon drinks and snibboes in the bar were followed by a three-course meal which was to the usual high standard for this venue.

A party of 28 members and guests enjoyed an excellent and memorable day trip to Leicester on election day, the 8th June 2017.

In the morning, the group visited the fascinating exhibition at the King Richard III Visitor Centre and then moved on to Leicester Cathedral to see King Richard’s sarcophagus.

After lunch in the King’s suite, the party was entertained by a very professional performance of “The Graduate”, starring Catherine McCormack as Mrs Robinson, at Leicester’s Curve Theatre.

The 2017 Afternoon Tea at Hassop Station

This new event on the club’s social calendar was suggested by chairman, Ainslie Kelly, who arranged for the Hassop Station Café to provide a traditional Afternoon Tea to our party of club members and their wives and partners on 2nd May. A total of fifty people sat down to the meal and the overwhelming judgment of those attending was that the afternoon had been a complete success. 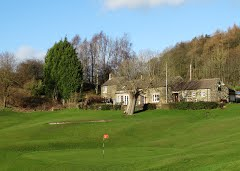 Annually, members, their wives or partners and guests are invited to our Christmas Lunch which, in 2016 was held at the clubhouse of Bakewell Golf Club, on 13th December. This was the third year that we held the event here, and as before, we were treated to an excellent meal in a convivial atmosphere.

The 2016 September Lunch at Hassop Hall 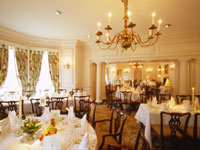 This was held at Hassop Hall Hotel. Historic Hassop Hall is set within the beautiful parkland of Hassop Estate, near Bakewell and is close to all the attractions of the Peak District.

Our annual September luncheons are open to all members and their guests and comprise pre-luncheon drinks followed by a fine three course lunch. As usual at these events a very enjoyable time was had by all.

The Club Outing to Lancaster and South Lakeland 2015

The 2015 annual outing was based in Lancaster for two nights. Our party comprised a total of 29 club members, wives, partners and friends. 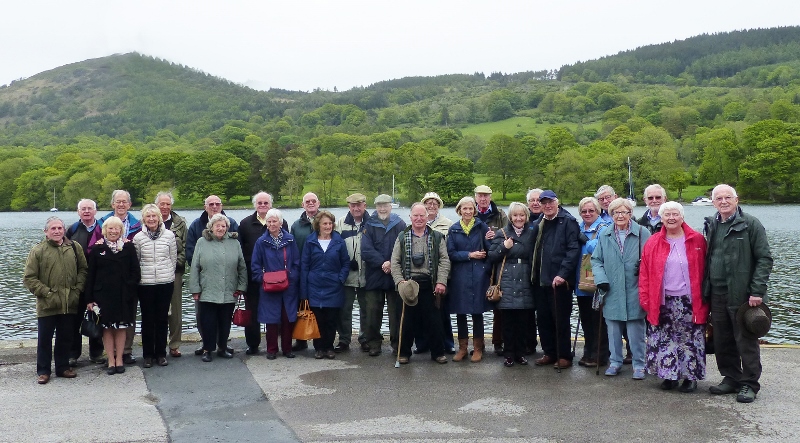 During our stay, visits were arranged for several activities, starting with a tour of Lancaster’s historic castle which, until quite recently, had served as a gaol. Not only were we shown some of the former prison cells but we were also taken through the impressive courts of law which are housed in the castle itself.

On the second day of our tour we travelled, via the picturesque village of Cartmel with its famous priory, to Ravenglass where we took a trip on the narrow-gauge Ravenglass and Eskdale Railway (known as “La’al Ratty”).

For our final day, we visited the Lakeland Motor Museum at Newby Bridge and then went the short distance to Lakeside where we joined the Windermere boat, “Teal”, for a cruise up the lake to Bowness from where, after a break for lunch and sightseeing, we returned home to Derbyshire.

On this club outing, the weather was unseasonably tempestuous at times but, nevertheless, this didn’t prevent us from having an enjoyable time.

The Club Outing to Durham and Newcastle, July 2014

Our party comprised a total of 23 Members. This included Members, their wives, partners and friends. 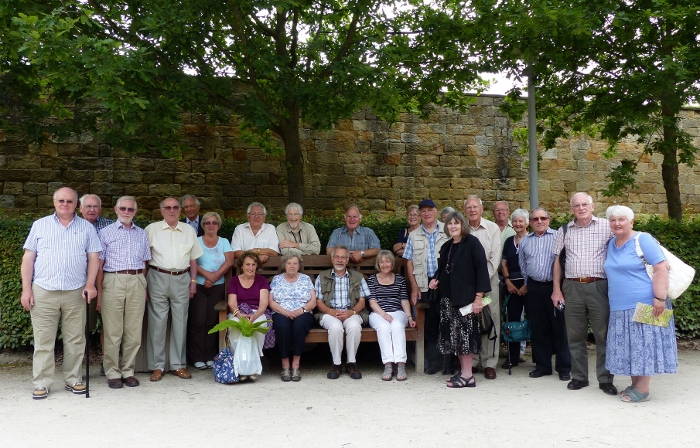 Basing ourselves in the Thistle Hotel, Newcastle, visits were arranged to Durham City and Cathedral, Alnwick Gardens, The Beamish Northumberland Life Museum and Cragside Estate (the home of William Armstrong the great industrialist).

On Monday evening we attended a performance of Agatha Christie’s play, “Black Coffee”. The whole trip was very successful and enjoyed by all; this much helped by a spell of glorious weather.