(Most recent first. Click on the titles for fuller descriptions).

The Peak District – Challenges and Opportunities

Since starting to hold our meetings by video conferencing in May 2020, we have usually relied on our own members to give the regular twice-monthly talks. However, for a change, a guest speaker was invited to address this one. He was John Lambert, who was representing the Friends of the Peak District, a charitable organisation dedicated to the protection of the Peak District National Park and to campaigning against inappropriate development within the Park.

Opening his talk with a brief history of the National Park, the speaker described how, in 1924, the Sheffield Association for the Protection of Local Scenery (later to become the Sheffield, Peak District and South Yorkshire Branch of the Council for the Protection of Rural England (CPRE)) was founded under the formidable leadership of Ethel and Gerald Haythornthwaite. With their allies, they campaigned for green belts to be designated around urban areas such as Sheffield, which was the first city to create one. The Association also raised funds to save areas of the adjacent countryside which were under threat. These included Dore Moor, Longshaw Estate, Mam Tor, Winnats Pass and Dove Dale, most of which have since been managed by the National Trust. The Haythornthwaites were central to the establishment of the Peak District as Britain’s first national park in 1951.

The speaker continued by discussing the continuing pressures upon the Peak District, not least those brought about by its own popularity. As the world’s third most visited national park it attracts an estimated 15 million visitors per year, the majority of whom are day-trippers from the surrounding cities and towns.

Now re-branded as the Friends of the Peak District, the organisation continues in its role as a guardian of the National Park by opposing unsuitable new development, such as quarrying, insensitive housing and major intrusive transport schemes but, at the same time, supporting environmentally desirable improvements to public transport and small-scale housing schemes.

With most of his audience being residents of the National Park (and many of us already members of the Friends), John’s presentation was very well received.

Pottery and Pipes to Packaging and Paddy Pads

It is probably quite rare for one family to have a record of businesses in one area for more than three centuries but Robinson & Sons of Chesterfield is one such, although the nature of its activities has evolved considerably over that period of time. The story of this company was told to us (by video conferencing) by our member, John Robinson. He described how his ancestors had been making pottery in Bolsover and Chesterfield before one of their number, William (Billy) Robinson turned his attention to the marketing of hosiery in the late eighteenth century. This business was highly successful and helped to establish Billy and his wife Ann as prominent citizens of the town.

One of their six surviving children, John Bradbury Robinson, born in 1802, was indentured to a chemist and, after completion of his apprenticeship, traded for some years as a chemist. At that time, pills and other medicines sold to the public were probably simply packed in a twist of paper – an unsatisfactory method. In 1839 he realised that a better method of packaging would be to use small boxes as containers. He sold the chemist business and started the manufacture of cardboard pillboxes. Following further box developments, in 1854 the company expanded its operations to include making lint, which was in high demand during the Crimean War (1853-56).

The speaker continued his narrative by describing the development of other packaging and cotton products made, and patents taken, by Robinsons. These included Gamgee tissue, a surgical dressing which has a thick layer of absorbent cotton wool between two layers of absorbent gauze. Invented in 1880, it is still in use today. The company was also the first manufacturer of sanitary towels in the world and later expanded its operations to include the manufacture of babies’ nappies.

Robinsons have viewed the welfare of their employees as paramount. They supported the establishment of a works council as early as 1918 and were to the fore by adopting the idea of paid holidays and pensions. They also encouraged social activities such as sports clubs and, most remarkably, to celebrate the business’s centenary, the directors organised and paid for a day trip to London in 1939 for all of their 3,704 employees. 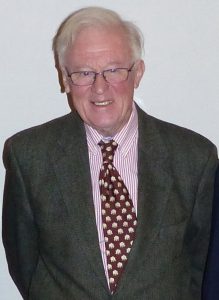 The Confessions of a Choir Groupie

The outside interests and enthusiasms of the members of our club are many and varied, as demonstrated by John Gibson, who was the speaker at this meeting (by video conferencing). John’s wife, Jan, is a member of a choir which, under normal (non-pandemic) circumstances performs in cathedrals around the country at the times when the resident choirs, many of whose members are schoolchildren, are unavailable in the school holidays. During such visits the speaker, a non-chorister himself, has been happy to accompany his wife on her travels. While she has been otherwise occupied in her choral duties, John has used his free time to explore the surrounding area.

Apart from his interest in the architecture of these cathedral buildings themselves, John has studied their histories and the cities in which they stand. In many places, he has been able to pursue another of his interests, the history of the Romans in Britain. Many cathedral cities have been built on ancient settlements, several of which can be traced back to Roman times, and even earlier.

In his talk, he described what he has learned about several of the places that he has visited. These range from the major cathedral cities such as Canterbury, Chichester and Lichfield, to the smaller ones, like Hereford and St Albans, and even to those that are not much larger than towns – Wells, Ripon and Southwell. Each of these places has its unique feature; the mediaeval map of the World (Mappa Mundi) in Hereford; the country’s only surviving mediaeval detached bell tower in Chichester; the association with Archbishop Thomas Becket, murdered in 1170 in Canterbury.

The speaker also showed pictures of non-ecclesiastical sites visited in his explorations. These included such far-flung places as Hadrian’s Wall in Northumberland and the magnificent Roman palace at Fishbourne in Sussex.

In conclusion, he talked about Nice (in the south of France) where he has come across a number of memorials to the victims of the Nazis during World War II. The most poignant of these memorials records the deportation to Auschwitz of thousands of Jews, including children, after the city came under the control of the Germans in 1943.

The Adventures of an Itinerant Farm Boy

Having been told in advance by our speaker that the title of his talk was to be ‘The Adventures of an Itinerant Farm Boy’, we were expecting to hear a tale about rural life at this meeting (held by video conferencing). However, at the outset, the speaker, Club member John Winkworth-Smith, explained that although coming from a farming family (and hence having been born a ‘farm boy’) he had chosen to follow a career in the law which, as it turned out, involved him in a huge amount of travelling around the world; a somewhat itinerant lifestyle.

With that clarification, John proceeded to relate a number of stories about his experiences as a lawyer specialising in international litigation on behalf of a variety of clients, many of whom were major industrialists based in Sheffield. It was on one such commission, in Turkey, that he managed to escape an attempted kidnapping by a local businessman with whom he had been negotiating. On another occasion, he was held at gunpoint by a German border guard. (To put this particular incident in context, it happened soon after a terrorist attack at the 1972 Munich Olympic Games, and the country was still on high alert.) The threat of violence was also present when he was involved in a case in Southern Italy where the Mafia clearly influenced the outcome.

It was not only the actions of fellow human beings that had given the speaker such alarming experiences. While visiting the factories of his various clients, there were occasions when he had narrowly avoided injury from malfunctioning processes in steelworks. At the other end of the temperature scale, he had faced a blizzard in Michigan when acting for another client.

The legal profession is not usually considered to be particularly hazardous but, for this speaker, it had often proved otherwise. Maybe it comes as no surprise that, in retirement, he occupies his time in the more gentle pursuit of sheep-farming.

Paxton – from Garden Boy to Knight of the Realm

Because of his connections with Chatsworth, the name of Joseph Paxton is very familiar to those of us living in this part of Derbyshire. It was appropriate, therefore, that Paxton was the subject of this talk (by video conferencing) given at our first meeting of 2021 by Club member, Don Naybour.

Relating the story of Paxton’s life, the speaker started by describing his subject’s early years. Born in 1803 as the seventh son of a farmer in Bedfordshire there is no record that he ever attended a school but, from evidence of his handwriting, he was clearly not an uneducated man. In his mid-teens he became a garden boy, later being employed by the Horticultural Society at their gardens in Chiswick. It was here that he met William Cavendish, the 6th Duke of Devonshire, who offered Paxton, then aged only 20, the job of head gardener at Chatsworth. Having accepted the offer, Paxton oversaw a number of major schemes including the relocation of Edensor village and the construction of the Emperor fountain, and a series of greenhouses. He also met and married Sarah Boan, who proved to be skilled in managing the family finances, leaving Paxton free to pursue his creative ideas and to develop his circle of influential friends and acquaintances.

The proposed Great Exhibition of 1851 gave Paxton the opportunity to present a scheme for the building based on his existing design for the Regia Lily House at Chatsworth. It was a modular arrangement which lent itself to a method of prefabricated construction, with the result that the exhibition hall was completed in a remarkably short time. For his contribution to the success of the undertaking, Paxton was knighted.

His reputation firmly established and now a wealthy man, thanks mainly to his investments in the early railways, Paxton left Chatsworth after the Duke died in 1858. He later worked on a number of projects and, from 1854 until his death in 1865, was a Member of Parliament for Coventry.

Don concluded his talk by examining the factors that had helped Paxton rise from his humble beginnings to his success in later life. Clearly, a formal education had not been essential but support and encouragement from his family and friends had played a vital role. 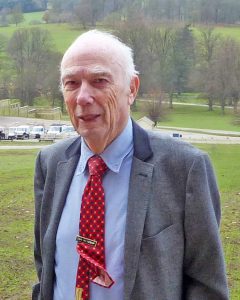